Kelly Hayes-Raitt is a citizen journalist who has reported from Iraq, Syria, Lebanon and the West Bank. She has started an online petition to be delivered to President Obama and the U.S Congress outlining 7 nonmilitary actions that can be taken to stop ISIS nonviolently. Ms. Hayes-Raitt lays out her 7 points in her MoveOn.org petition:

To President Obama and the Members of the U.S. Senate and House of Representatives:

Before we commit to a limited, “support" troop reinvasion of Iraq, can we please hit the pause button and consider non-military options? Yes, ISIS, a brutal offshoot of al-Qaeda that stretches from the Mediterranean in northwest Syria to the Persian Gulf in southeast Iraq, needs to be stopped. The questions are how and by whom. The U.S. has many options. Will you exhaust them all before you send our men and women back into battle?

1. Consider all the steps between doing nothing and dropping bombs. The world witnessed a miraculous example of successful diplomacy last summer: It was considered a “done deal” that Washington would unleash limited bombing on the outskirts of Damascus to punish Syrian President Bashar al-Assad for using chemical weapons. Then a seemingly off-the-cuff remark by U.S. Secretary of State John Kerry set in motion a diplomatic solution that resulted in Assad turning over his stash of chemical weapons, thereby successfully ridding the world of one of the last major caches of chemical weapons – and avoiding more casualties on America’s conscience. Disarming proved to be much more successful “punishment” than bombing.

We realize this tactic worked because Obama’s threat to bomb Syria was perceived as real. Could this tactic work again? Or are you planning to reoccupy Iraq? We implore you to employ non-military options first.

2. Stop considering Syria and Iraq in separate vacuums; a regional viewpoint is necessary. For example, the regimes of Syria’s Assad and neighboring Iraq’s Nouri al-Maliki (who has just retained political power by being named vice-president) are allied. They share a common opposition to ISIS. Yet, the U.S. funds the Iraqi government while also funding fighters who oppose the Syrian government, ignoring that some of those opposition fighters affiliate with ISIS and spill from Syria into Iraq. Thus, American tax dollars support opposition fighters trying to undo a government supported by American tax dollars!

3. Stop justifying military funding, arming and intervention in Syria or Iraq by referencing human rights abuses. Yes, it’s excruciating to view photos of hundreds of children gassed to death and not want to punish, but the larger truth is every side in Syria and Iraq are engaged in human rights abuses. Adding more troops, guns or military money does not suddenly make governments, soldiers or insurgents more humane.

4. Work regionally to cut off supply routes of weapons. Fewer weapons means less fighting and fewer casualties – and fewer generations of traumatized children raised to believe violence is the only option. Syrian rebels’ weapons flow through Turkey, Lebanon and Iraq. The U.S. should be a leader in negotiating a regional effort to stem this flow of weapons; instead it provides weapons to Syrian fighters assuming they won’t land in ISIS fighters’ arms.

5. Dry up the black market for crude oil and gas. After benefitting from oil and gas takeovers in eastern Syria, ISIS has seized oil facilities in Mosul and Kirkuk and is selling the Iraqi crude at a deep discount on the global black market, raising $3 million/day and making it the wealthiest terrorist organization on the planet. It’s estimated they could make $1 billion/year.

6. Engage the United Nations. The U.S. is about to assume the presidency of the U.N. Security Council. ISIS creates an unusual opportunity for opposing factions to work together: Iran, Iraq, Syria, Saudi Arabia, Turkey, the Gulf States and the U.S. and its western allies all see ISIS as a security threat. On Sept 24, the Security Council will consider a U.S. proposal to “prevent and suppress” the recruitment and travel of foreign fighters to join terrorist groups. It is estimated that 12,000 rebels from 74 countries have joined extremist groups in Iraq and Syria. While stemming the flow of fighters is a good step, it is open to abuse. And it’s a bit like the Dutch boy with his finger in the dike. Better to engage the U.N. in pressuring countries to stop arms movement and black market oil purchases. Uniting opponents to ISIS is a unique opportunity to get these countries to suspend their proxy wars.

7. Stop doing the same thing and expecting a different outcome. Iraq didn’t have any terrorist groups until after the U.S. invasion. Al-Qaeda bubbled up in 2004. If 100,000 U.S. troops couldn’t wipe out al-Qaeda in Iraq, why do we think we can now without another full-scale war? Targeted precision strikes lead to political instability and the perpetuation of extremism.

Are these suggestions more complicated? More time-consuming? More challenging? Yes. But they are far less destructive for Iraqi, Syrian and American children forced to grow up assaulted by war.

Thank you for your consideration.

To this I would add an 8th point, which is to try to engage in a dialogue with the Imam leader of the Islamic State, Abu Bakr al-Baghdadi. We must find a way to see the humanness in each other. This is best done human to human. 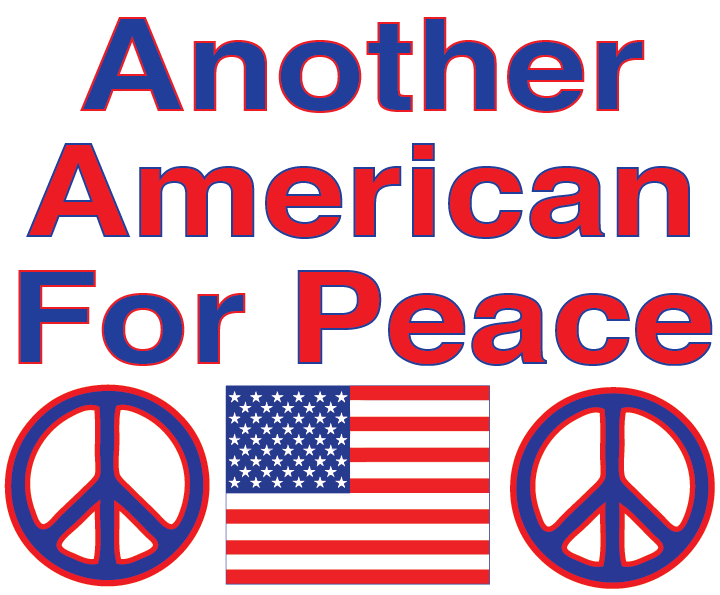 Posted by @ neverbetter.com at 2:01 PM No comments:

August 2014: Tens Of Thousands Of Nonviolent Israelis And Palestinians March For Peace

Much has been written about rockets being fired at Israel by Hamas and bombs being dropped on Gaza by the Israeli government, the ongoing conflict between Israelis and Palestinians and the pain it causes.

Did you know that this month, August 2014, there were at least two rallies for peace that drew 10,000 people in Israel? There are so many people on all sides who realize the use of violence and destruction will never bring a solution, it will never bring peace.


First, as reported by Faiz Abu-Rmeleh at 972mag.com, approx. 10,000 people marched in the northern Israel Arab town of Tamra in on Saturday, August 2nd. Palestinians took to the streets in a peaceful protest in solidarity with the innocents being oppressed in Gaza. Children symbolically carried dolls wrapped in cloth with with red stains and photos of the victims of the recent violence.

Then, on August 15th, over ten thousand Israeli Anti-War activists peacefully descended into Rabin Square in Tel Aviv to demand that the government stop the violence being perpetrated on the people of Gaza stop immediately.

Tonight’s rally, sponsored by a number of left-wing groups in Israel, including the political party Meretz, overwhelmed those extremists who showed up with the volume of participants.

Organizers of tonight’s protest had the following message for Prime Minister Binyamin Netanyahu, who many protesters addressed with chants of “Bibi, go home”:


“The next round of fighting can be prevented. No to the way of wars – we must have a political solution. After an agonizing month of war and death, in the face of mounting waves of incitement and hatred, which increasingly tear up the Israeli society, we stand up to demonstrate for peace and for democracy.”

Israel and Hamas in Gaza are currently in the midst of a five-day ceasefire as officials from both sides try to hammer out a long-term truce, which will likely only be secured with an end of the blockade in Gaza. It’s precisely this point which famed Israeli novelist David Grossman addressed, telling the crowd, “We won’t be able to breathe deeply in Israel as long as people in Gaza feel choked.”


Deep gratitude for all of the Nonviolent Revolutionaries on both sides of this conflict for seeing beyond the anger and embracing the human in each other. 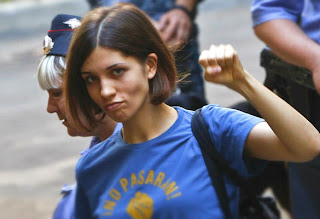 Tens of thousands of people have taken to the streets to rally (Chicago, New York, SF ) in Free Pussy Riot protests, calling for the charges to be dropped.  Celebrities have also voiced made their opinions known, Anthony Kiedis, lead singer of the Red Hot Chili Peppers, wore a Pussy Riot T-Shirt at a show in Moscow to show support. Ad Rock from the Beastie Boys showed up to DJ a benefit and other rock stars Peter Gabriel, Madonna, Sting, and Paul McCartney have spoken out in support of Pussy Riot, free speech, and the importance of dissent.

On Saturday, benevolent Orthodox cleric, Tikhon Shevkunov, who is widely believed to be President Vladimir Putin’s spiritual counselor, said on state television that his church forgave the singers after their “punk prayer”. Archpriest Maxim Kozlov agreed, but also said, "“We are simply praying and hoping that these young women and all these people shouting in front of the court building, committing sacrilegious acts not only in Russia but in other countries, realize that their acts are awful,” he said. “And despite this the church is asking for mercy within the limits of law.”

In a further development, former world chess champion and Russian opposition leader, Garry Kasparov, tells Eli Lake how he was beaten and arrested at the sentencing of Pussy Riot. Kasparov faces the threat of jail himself over the incident.

However you feel about what Pussy Riot did or where they did it, these ladies deserve some props for expressing their point of view in a courageous and evocative way in a place where it's not that safe to do so. They may have to do some time, but they do so having accomplished their mission... speaking truth to power with the voice of the oppressed, pushing the limits of freedom of speech in places it needs to be pushed, and showing the world with their words and Putin's actions just what a punk he is.

Mother Jones Magazine has been keeping the story updated here 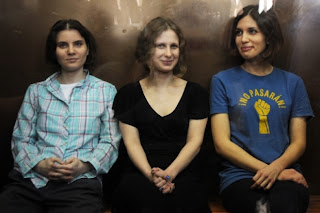 What Pussy Riot Teaches Us 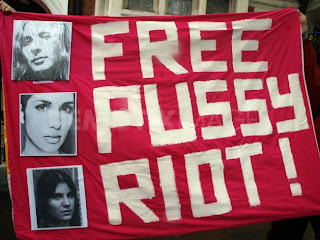 Posted by @ neverbetter.com at 1:59 PM No comments: